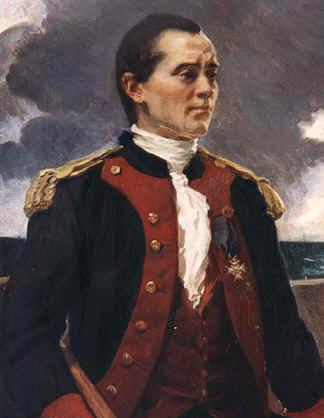 Well you learn something everyday. All these years of visual research, programs in maritime and naval museums and there are still large surprises in American history. I just found this arcane bit and was intrigued.

John Paul Jones was one of my boyhood heroes. I’ve visited his tomb in Annapolis. His famous quote “I’ve not yet begun to fight!” was not only inspiring but he meant what he said. He and his crew boarded HMS Serapis while Bonhomme Richard sank along side taking its colors to the bottom.

Jones took the battered Serapis into Texel in Holland. The British ambassador asked that the "pirate" Jones be taken into custody since his ship bore the flag of “no nation”.

Jones has received a description of the new American flag in a letter from Benjamin Franklin in Paris. “It is with pleasure that we acquaint your Excellency that the flag of the United States of America consists of thirteen stripes, alternately red, white, and blue; a small square in the upper angle, next the flagstaff, is a blue field, with thirteen white stars, denoting a new constellation.”

He took this to his sailmaker who make up these colors that then flew from the Serapis. The Dutch got the same description from Franklin, recognized the flag, and concluded that Serapis was an American national ship. Jones and his crew were warmly received.

So for 30 days and one ship this was an internationally recognized American flag.

Now I’m waiting for the stranger who’ll stop by and inquire why we fly the Serapis flag.